(We are very happy to welcome Claudia to this grub review, and were thrilled to add her input!)

Being in a family where both mom and dad work full time can be really hectic, leaving you asking at 5:30 p.m....WHAT'S FOR DINNER?? I'M STARVING!! Enter Pho Van Van to save the day (when you’re greeted on a first name basis…you wish you could buy shares in the place…).

Pho Van Van has been one of our favourites since we discovered it about 4 years ago. Nestled amongst a chain of restaurants to appeal to any palate in West Wellington Village, Pho Van Van offers a comfortable atmosphere, friendly service and delicious food to appeal to even the pickiest of diners (aka: “Miguel” ;).

We LOVE to share the following appies:
#1: Salad rolls with shrimp (and peanut sauce) – according to Miguel, this should never include mint (he’ll learn to love it)

#3: Deep fried spring rolls (Miguel: love it every time!) (Jenny: I wish Miguel wouldn’t insist on dissecting the rolls every time looking for pieces of shrimp…grrrr)

The appies are a perfect size, allowing you to try a few different items without filling up before your main meals…often a problem for parents with little ones.


Sadly, our main meals rarely differ from the following – but really, if it ain’t broke, why fix it??

Jenny: #67 Rice noodle soup with shrimp and chicken (spicy saté) – the best part is the little deep fried onions and saté sprinkled on top; #309 Grilled Chicken and Shrimp on vermicelli (amazing with carrots, cucumber, lettuce, peanuts and the most delicious fish sauce ever!!)
Miguel: #309 Grilled Chicken and Shrimp on vermicelli (same as mom – minus the lettuce, cucumber and fish sauce); #56 Shrimp fried rice – the more shrimp, the better!
Claudia: #64 Savory seafood soup with rice noodles – she can’t imagine anything else could taste better ;)
Marco: #101: Rice noodle soup with rare beef…always a hit; #501 Beef in black bean sauce with vegetables…good, but the soup is better.

Miguel: I would like people to know that everything is really good on the menu. There isn’t anything that isn’t good. I like the fact that it is all windows on the first floor…so very bright and welcoming. It is located in an old house, so it feels friendly and you feel at home. It just feels very comfortable. And there is deep fried ice cream!!
Its one of my favourite restaurants ever – it’s a really good place to go with your family. There is no other better Vietnamese restaurant in Ottawa from my perspective.

Jenny: We’ve tried quite a few different pho spots in Ottawa, from Merivale Road, to the Market to Chinatown…but by far, we’ve always preferred, loved Pho Van Van, and have essentially given up going anywhere else. Miguel and Claudia have pretty much captured the essence of the spot, so I won’t repeat other than to say that Pho Van Van offers great food, good prices, comfortable atmosphere, reasonable portions, quick and friendly service – we totally recommend!!

Claudia: It is very good if you’re looking for a light delicious snack, because my mom and I like to go there for a quick lunch on the weekends when we go shopping. Everyone in our family thinks it is amazing. Pho Van Van is very close to my school, and last week, my friends and I tried to go at lunch during the week, but it was too busy to get a table. Next time, we’ll get shrimp salad rolls for take out, then go back to school. It is my favourite restaurant.


Q & A:
What is the first thing you notice when you walk in?
It has a comfortable setting and you are always warmly greeted by the staff.

Jenny: As with most Asian fare restaurants, the variety can be overwhelming! It has taken us years to determine exactly what we love to eat there…but whether it’s for dine in or takeout, we’ve never been disappointed.

Is the service quick?
Very quick – we both agree to that. Often times, we think – whoa – how can they do that so fast??

Is the service friendly?
They are very friendly, and more importantly, accommodating (a bonus for young diners). Example: both Claudia and Miguel LOVE the fish cakes in the seafood pho – and the staff is always willing to give them extra fish cakes on anything they order…and we’ve never been charged once.

Are the prices reasonable?
Miguel: I don’t know????
Jenny: Yes, very reasonable (or we wouldn’t be back so often!!).

Is the location accessible?
It is easily accessible by car and bus as it is centrally located on Holland Avenue, near the Wellington Street intersection (just behind the Great Canadian Theatre Company). There is a limited amount of parking in the rear (about 5 spots), but we’ve never had trouble finding parking along Holland Avenue. However, it is not wheelchair accessible ;(  (Miguel insisted this needed a sad face, as it is the only thing that he can think of that is wrong with PVV).


Final words: Sunday at 9 p.m….Miguel says “I’m so hungry for pho right now…damn you Grub Review!” Good night all, and until next time, eat well!! ;)

http://www.fratelli.ca/aboutus.php
On March 10, Miguel took the executive decision to go to Fratelli’s in Westboro for dinner; Jenny was pretty excited at the prospect, as there ain’t anything wrong with pasta and vino! Fratelli’s first opened in the Glebe in 1996, and has since grown to 4 family owned and operated locations in Ottawa. If you’re looking for great Italian food and wines served in a friendly unpretentious atmosphere – this is the place!
Mama’s Review:
We got dressed up in our finest casual clothes, and made our way through the lively streets of Westboro to our destination with inquisitive minds and hungry bellies. As it was a Saturday night, the restaurant was fully booked, so we asked the hostess if we could eat at the bar. The restaurant was very clean (other than the bread and pasta that fell out of Miguel’s hands…;-)
Miguel’s first observation was that this was a very “classy bar” (and noted this to his iPod)…and he was right! The bar was small – room for six seats – but very cozy and comfortable. The lights were dimmed at the bar and throughout the restaurant – the tables had nice candles on them which made for a nice ambiance. It didn’t take too long to be served the customary warm baguette with our favourite olive oil and balsamic – and we had to pace ourselves because it was so yummy!
The service was very good and the bartender was friendly and polite. Miguel had two very beautifully decorated Shirley Temples (YUM), and I had a lovely glass of the Tin Roof Merlot (ok, ok, for those who know me - I had two glasses ;-), which was a great accompaniment to the delicious mussels and penne we had. We also had the Sambuca shrimp, which is simply to die for – especially when you dip the warm bread in the amazing sauce – addictive.
The servers were quite curious as to why we were taking notes throughout our meal – so Miguel told them that we write a blog about the restaurants we visit together – which sparked a huge interest in what we thought! Miguel didn’t think it would be fair to tell them which restaurant we liked best so far, so he told them they were all good – and they are! Although, truth be told – Fratelli’s has been a favourite’s of Miguel since he was small enough to fall asleep on the bench. Another very enjoyable evening with my little man!
Miguel’s Review:
The shrimp was good but I did not like the sauce. I liked the penne with butter and parm. But it tasted better with the sauce from my mom’s mussels. But looking at the mussels made me think: how do they mate? Since they don’t move very fast, or at all, do they just mate with the mussel closest to them? Do they just open up their shell a bit…and kiss? I’ll have to find out! The mints they gave us on the way out were delicious. I had a nice time – even though my mom made me eat with a napkin on my lap! And I did not like it…;-)
Til next time, M&M
Posted by M&M's Westboro Village Grub Reviews at 5:36 PM 2 comments: 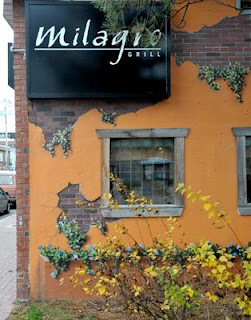 Friday night, 6 p.m....and we're STARVING!! Its just the two of us, and we unanimously decide to go to the Milagro Grill in Westboro Village, which opened in March 2006.

We’re greeted by a lovely hostess who seats us at a cozy table for two. We look over the menu, and decide to share a few very yummy appetizers, ordered eloquently by Miguel himself (aka: “Professor Awesomo”):

I had limonada to drink. It was sour but good.

Mama’s Review:
The menu is quite impressive and very reasonably priced. Much like Miguel, I would give our food a very high rating on the scale. The nachos were amazing with a perfectly seasoned shredded chicken (you have to ask for a side of their signature hot sauce to dip!!), and the calamari was flawlessly fried with an amazing roasted garlic aioli. The tequila shrimp was also a favourite, especially since it was served with a beautifully ripe avocado.

The service was great, the ambiance was warm and inviting, and overall, we had a very nice evening. This one will be tough to beat!!